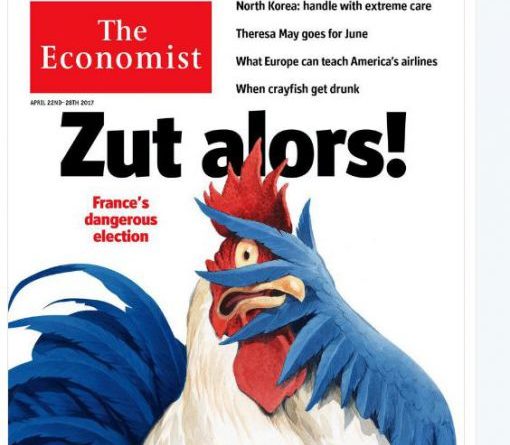 In the 5th May issue of The Economist, you can find a simulation of the results of the French presidential election, had France the same electoral process as the US. The conclusion is that Marine Le Pen might have won. This simulation is not just for fun. The magazine’s finishing line is that « the difference between a populist tide and a centrist resurgence may come down to the electoral system ».

I can imagine easily the comfort journalists with the Anglo-American Economist can draw from such a conclusion. Here is France (!) giving lessons of openness and tolerance by rejecting the same xenophobic ideas their two reference countries voted for. It would be so much more comfortable if this were due to the chance of electoral systems rather than the necessity of voters’ choice.

Let me first brush aside any suspicions of Anglophobia. I am a subscriber to The Economist since 1986 and its weekly reading is a Sunday pleasure. I am waiting every year for the Christmas double issue as eagerly as I was for the Saint Nicolas biscuits my grandmother was sending to us from Calais early December.

But I also know the benevolent contempt which commands the tone of the articles devoted to France in this excellent magazine. It can then drift away from basic rationality. It is the case in the article I mentioned.

The Economist’s simulation is based on the results of the first round, with an electoral college based on 2 representative for each of the 18 regions, to which are added 157 delegates spread proportionally to the 18 regions’ population.

The first obvious mistake is to work at the level of regions. French regions are young administrative bodies: they were first created in 1956. As for the 18 current ones, they celebrated their first birthday a few months ago. If we were to have an electoral college, this would be at the level of the départements, which date back to the Revolution. The excellent NC233 website by the way makes similar simulations to The Economist’s (but without any grandiose political conclusion) precisely at the level of the département. This is a first learning for The Economist’s data team: a statistician should never work off ground. Always beg the help from an expert of the matter.

I did a simulation, with one delegate per département (including overseas and French people living abroad), plus 577 delegates spread proportionally to the population of the départements. This is similar to the way the electoral college works in the US. Based on the results of the first round, Emmanuel Macron gets 214 delegated, Marine Le Pen 190, François Fillon 134 and Jean-Luc Mélenchon 132. None of the candidates get an absolute majority. But Emmanuel Macron does have a relative majority. You would need to really twisted system (as the one in the US?) for him not to be elected.

Another question you might ask is whether we should use for the simulation the results from the first round of from the run off. In the latter case, there would be obviously no discussion: Emmanuel Macron gets 505 delegates.

First round or run off? The Economist would argue that there is only one round in the US and UK elections. Thus this would be the one to be retained as French voters then tell their unconstrained true choice. This is the second mistake. The way people vote depends on the electoral system. There is no way to know how French people would have voted with a different system. The National Front is an (important) minority which is consistently rejected in run offs across the board. One can reasonably think that the result of the first round would have been different, had it been decisive. Of course, it would be better to prove it. I am explaining in the next (and slightly technical) sections how this could be done.

Simulations as the one done by The Economist are flawed because the electoral system cannot be considered as exogenous from the vote. Endogeneity being a mathematical property of the data, the endogeneity of the electoral system can be demonstrated. There is only one way to do that: set up a modelling explaining the results of an election which would take place at the same time according to two different systems.

In France, this is precisely what we have with the municipal elections. Below 1000 inhabitants in a town, town council members are elected separately in a two rounds system: the people who get the more votes get into the council. Above 1000 inhabitants, voters choose between different lists (with as many candidates as there are slots in the council). The list which is ahead gets 50% of the seats in the council and the rest is allocated proportionally (I am simplifying a little bit).

In order to prove that the electoral system is endogenous, we have to model the results as a function of that system. There is relatively little information on small towns: there are too many of them and political affiliation is meaningless at that geographic level. The only information we have is the name and sex of the candidates. It is thus possible to do a modelling and explain the score of a list or a candidate as a function of the electoral system and the sex of the candidate. For the list system, I retained the sex of the top candidate on the list – usually the candidate for mayor – and not the number of women: the “chabadabada ” rule imposes to have men and women alternating on municipal ballot lists. In order to eliminate possible biases due to the fact that women candidates would have been chosen because they would have little chance to win, I restricted the sample to elected candidates or lists. I also put as explanatory variables in the regression the characteristics of the town, coming from the most recent census (sex, age, job, level of education distributions).

Here is then how it works : we want to know whether the score obtained by the elected list or candidate depends on the type of electoral system and whether the score obtained by women are significantly different form the scores obtained by men. The model can be estimated under the assumption of exogeneity or without it. If the two estimations give different results, then the electoral system is endogenous. This is precisely what happens.

I followed the same process as the one described in this paper , for which we obtained the « Best Paper Award » of the Esomar Big Data World conference in Berlin last December. The Hausman endogeneity test confirms that variables linked to the electoral system are indeed endogenous.

An interesting result is that there is a negative bias for the list conducted by women, which does not exist in the ballot system for small towns (I will come back to that in another blog, as it deserves a more thorough analysis). When it is assumed that the electoral system is exogenous, the modelling indicates that a list with a woman at the top gets 6% less, all other things being equal, than a list conducted by a man. The modelling taking into account endogeneity indicates that the negative bias is actually larger than that.

The main conclusion is that it is not possible to simulate changes in the electoral system, because the behaviour of the voters depends on the system. The Economist’s simulation is typical what a junior forecaster would do: assume that the variable that defines the forecasting scenario is exogenous when it is not. A nice showcase of the Lucas critique.

Limited knowledge of basic econometric principles, or just difficulty to swallow the fact the France rejected populism by a 66/34 margin (49/51 in the UK and 46/43 in the US)? And maybe also, but here I am going out of my field of expertise, bewilderment that there might be a link with the fact that France never applied in extenso the economic recipes promoted by The Economist?